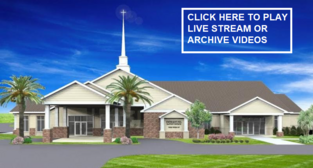 In reviewing the history of Immanuel Baptist Church, God's hand can be seen in the development of its leadership and location.

There are many special events in the life of this church -  here are a few of the milestones:

October, 2008
The proper legal structure of IBC was established and the constitution/by-laws approved.

December, 2010
The Church continues to grow, leading to the offer to purchase twenty acres of land on County Road 102.  The first official meeting of the church on that property was on December 22, 2010, as a time of praise and thanksgiving; asking God to affirm His Will for the project.  Funds were obtained and plans developed for a new church building.

February, 2012
Ground-breaking services were held at the church site on CR102.  IBC continued to grow in membership, physical assets and pastoral demands beyond the ability of one pastor.  Pastor Jerry Montgomery considered returning to retirement as a new leader in the international missions field was considering return to his home in the county.  In a special called meeting the church extended an invitation to Mike Dameron to serve as Associate Pastor, effective March 1, 2012.

August, 2012
After months of construction, IBC met in the new Worship Center for the first time on August 5, 2012.

September, 2012
With mixed emotions, Pastor Jerry Montgomery read his letter of retirement to the congregation as of December 2012.

October, 2012
The church building and facilities were dedicated to the service of the Lord.

January, 2013
Mike Dameron became the senior pastor of IBC, by unanimous vote of the membership.
Jerry Montgomery became Pastor Emeritus of IBC in recognition of his continuous service to the church since 2008.

August, 2014
The building and equipment was fully paid off in just two years and two weeks of moving into it.

August, 2015
We broke ground on a new 500 seat Worship Center and Fellowship Hall to be completed by May 2016.

We had our first service in our new building.

View on Mobile
Watch Us On Roku